I have been planting wildflowers in a raised bed that is made from cinder blocks since the 2nd spring after we purchased the Homestead. This year, everything is late blooming. I usually see blooms in early May, but this year, it happened in very late May.

I plan on filling a few beds with tons of lilies. I thin them every spring right before the last frost. I end up with more lilies each year. Lilies are one of my favorite flowers.

This seems to be the majority of the bee and butterfly mix I purchased this year and added to the flower bed. The flowers come back each year and I add a new seed blend each year. The butterflies love them so I have no complaints. We have so many butterflies this year. I have had them landing on me every time I sit outside with a cup of tea or my morning coffee.

Not sure what this little guy will turn into, but he had a nice feast before taking a nap. (He was curled into a coil before I disturbed him to get a picture.)

These two were part of last year’s wildflower mix. They come in so many colors and brighten up the bed.

This one is a new addition this year and doesn’t seem to be weathering the heat very well. 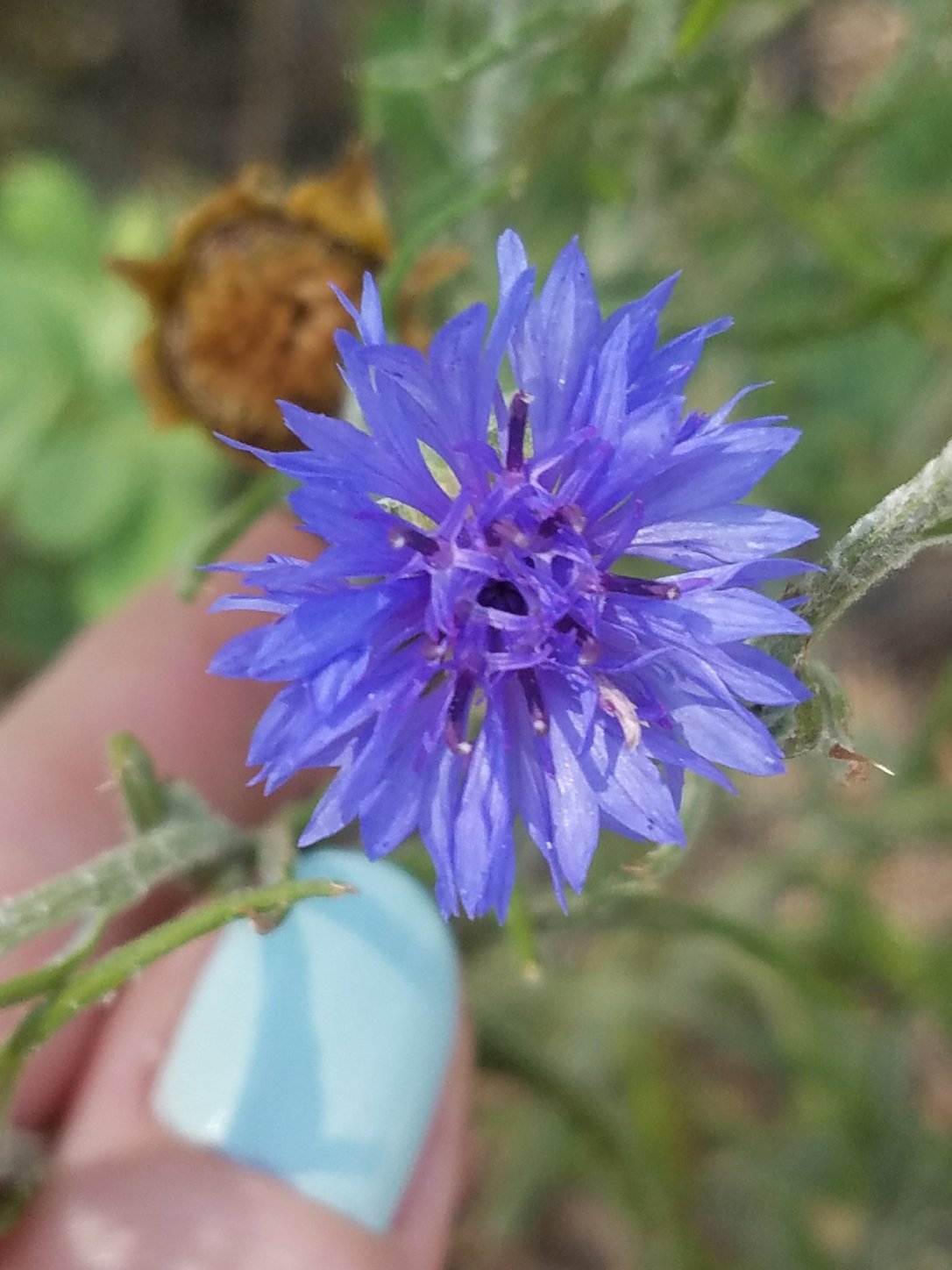 One of my favorites that is new this year. I have no idea what any of the flowers in this bed are, except for the lilies, because the boxes of seed mix that I buy don’t have any actual plant names listed on the package. I don’t mind because I just want oodles of flowers. The names don’t matter as much as the colors. 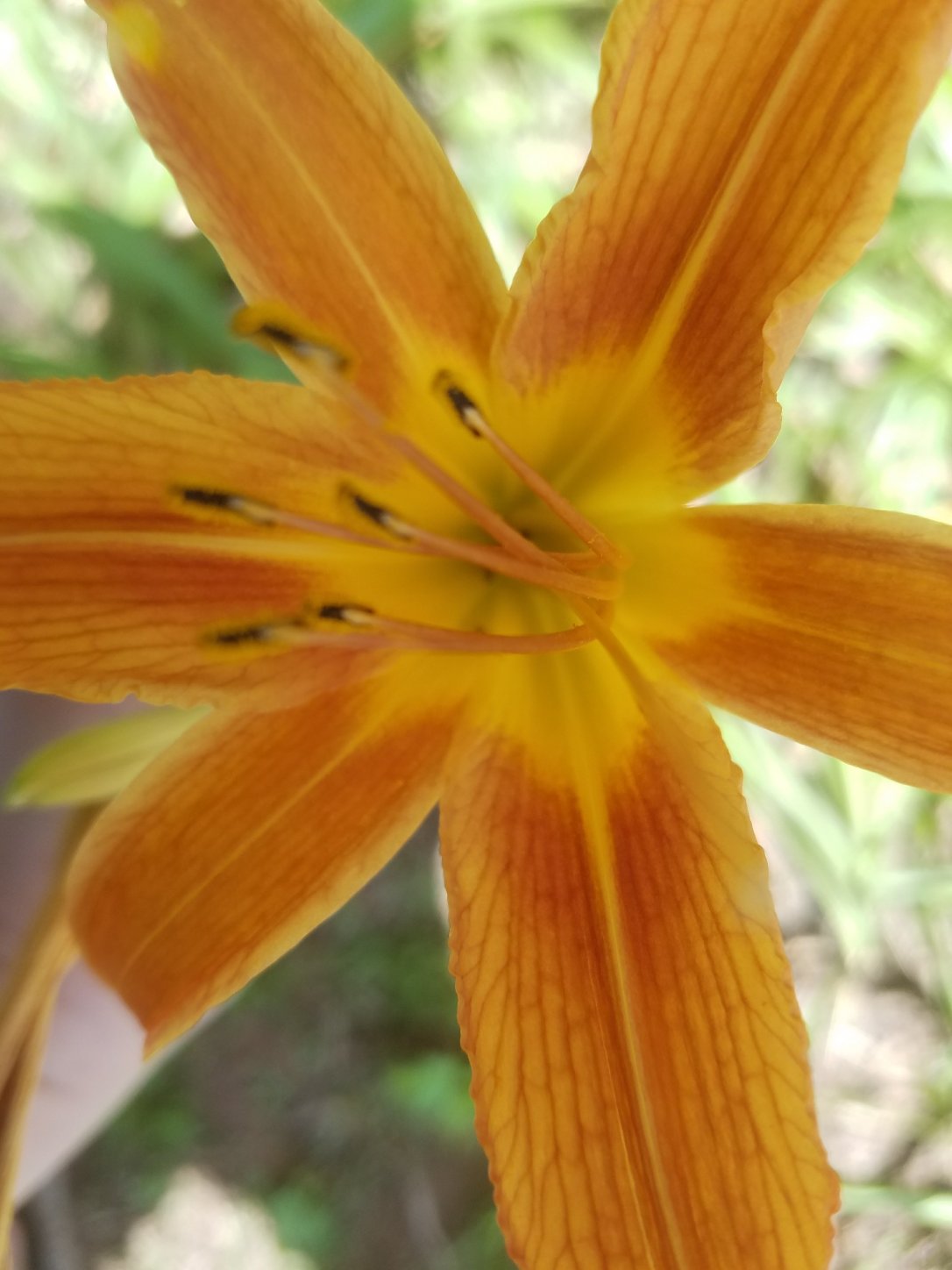 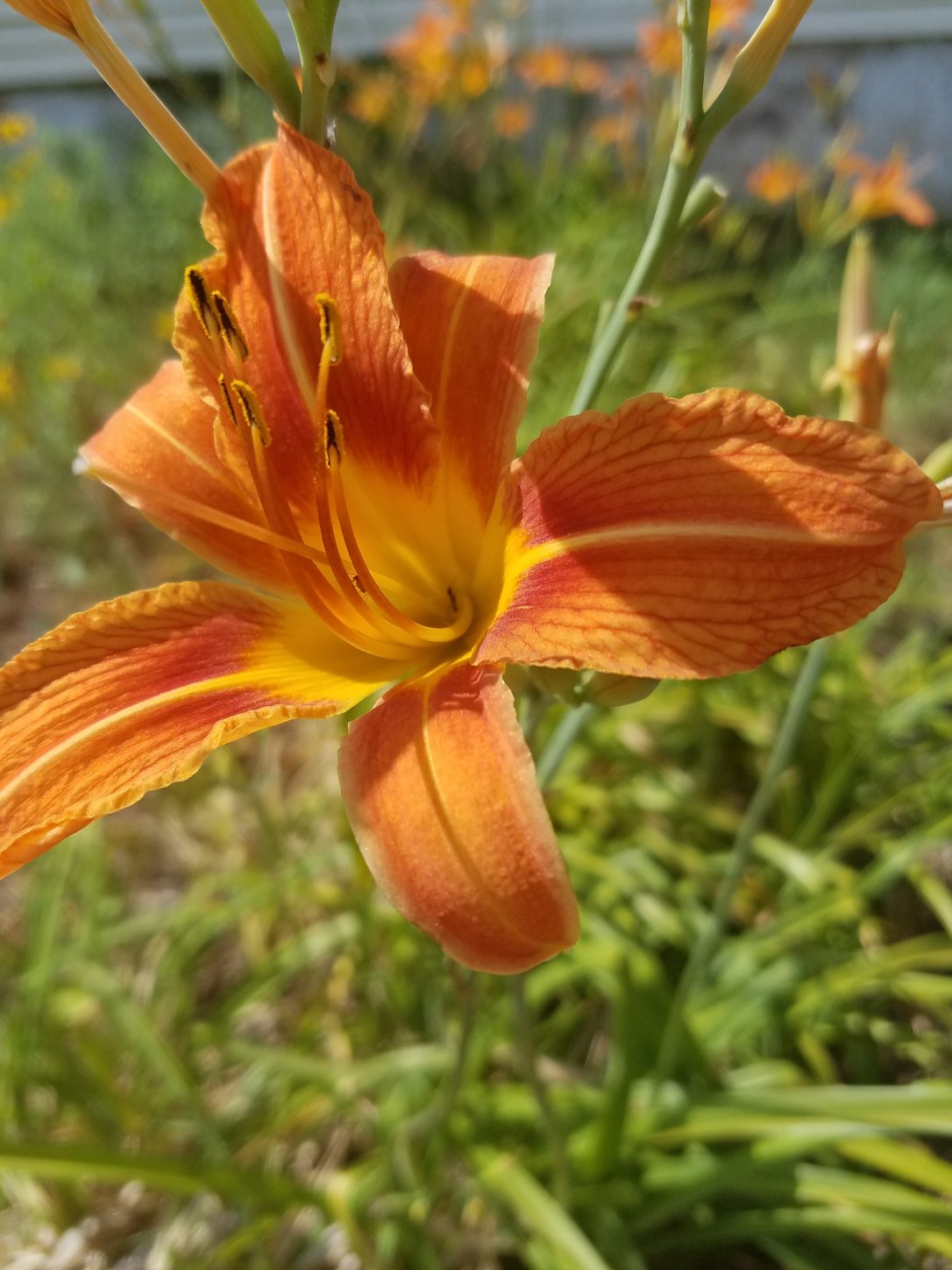 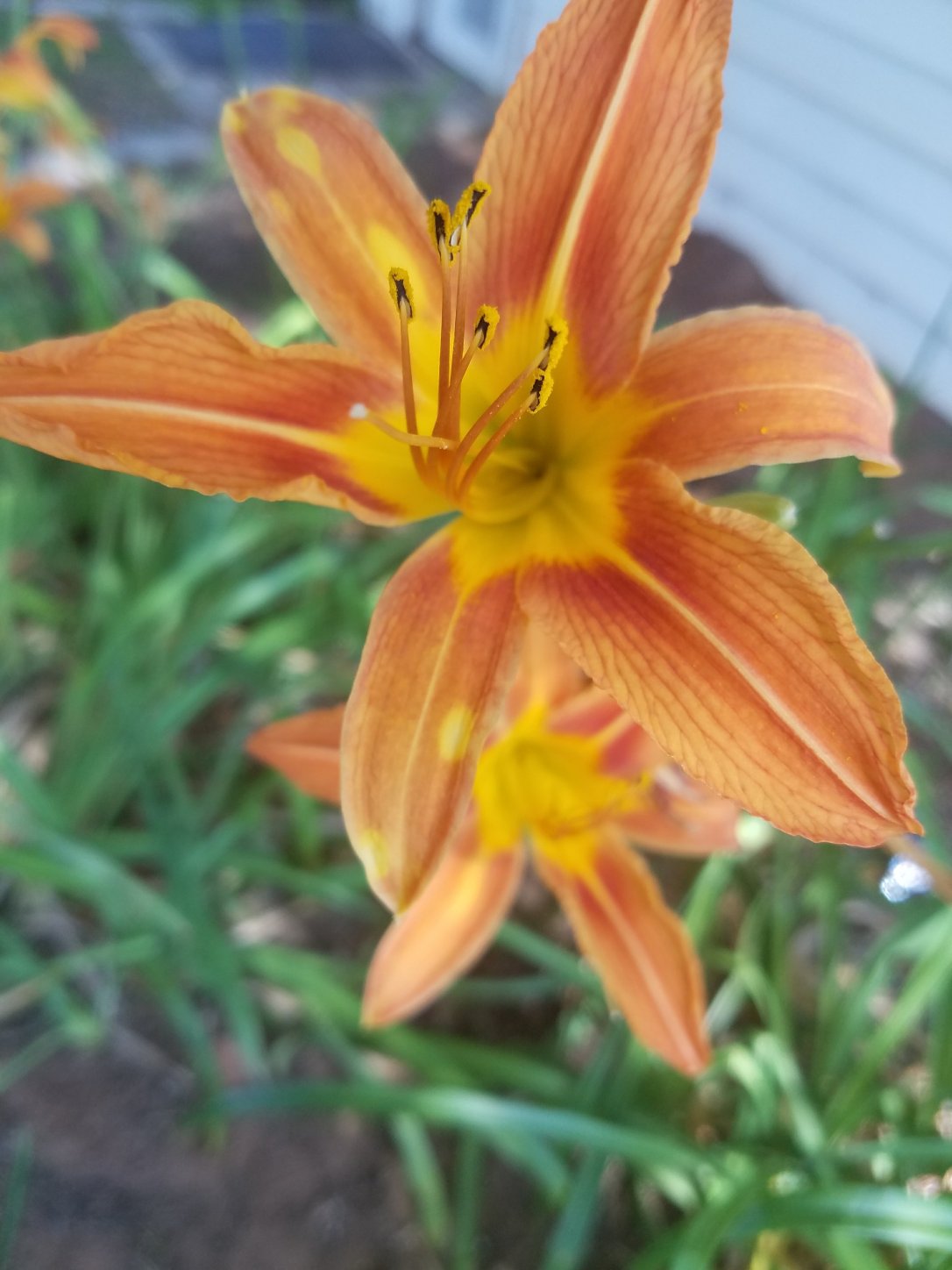 I have lilies in three different flower beds and they all seem to be doing rather well especially when the only watering they receive is from the rainfall. I don’t remember the exact type of lilies these are, but I purchased them locally from the Canna Farm. (I purchased them from a member of the family, which owns the Canna Farm, as she was selling the bulbs on Facebook.) She told me they were drought resistant, she never watered them, and they only received rainfall. I have done the same with my lilies and they are thriving. I couldn’t have asked for an easier flower to grow. Now, I just need a wider variety of colors for lilies. I may plant daffodils or some other plant that is planted in bulb form.

I realize this picture is a bit blurry, the wind started back up and this was the best picture I could get of this flower. I am pretty sure this is considered a weed to most gardeners, but so are most wildflowers. I didn’t yank it out, a butterfly landed on it as soon as I moved away from it so, it stays. 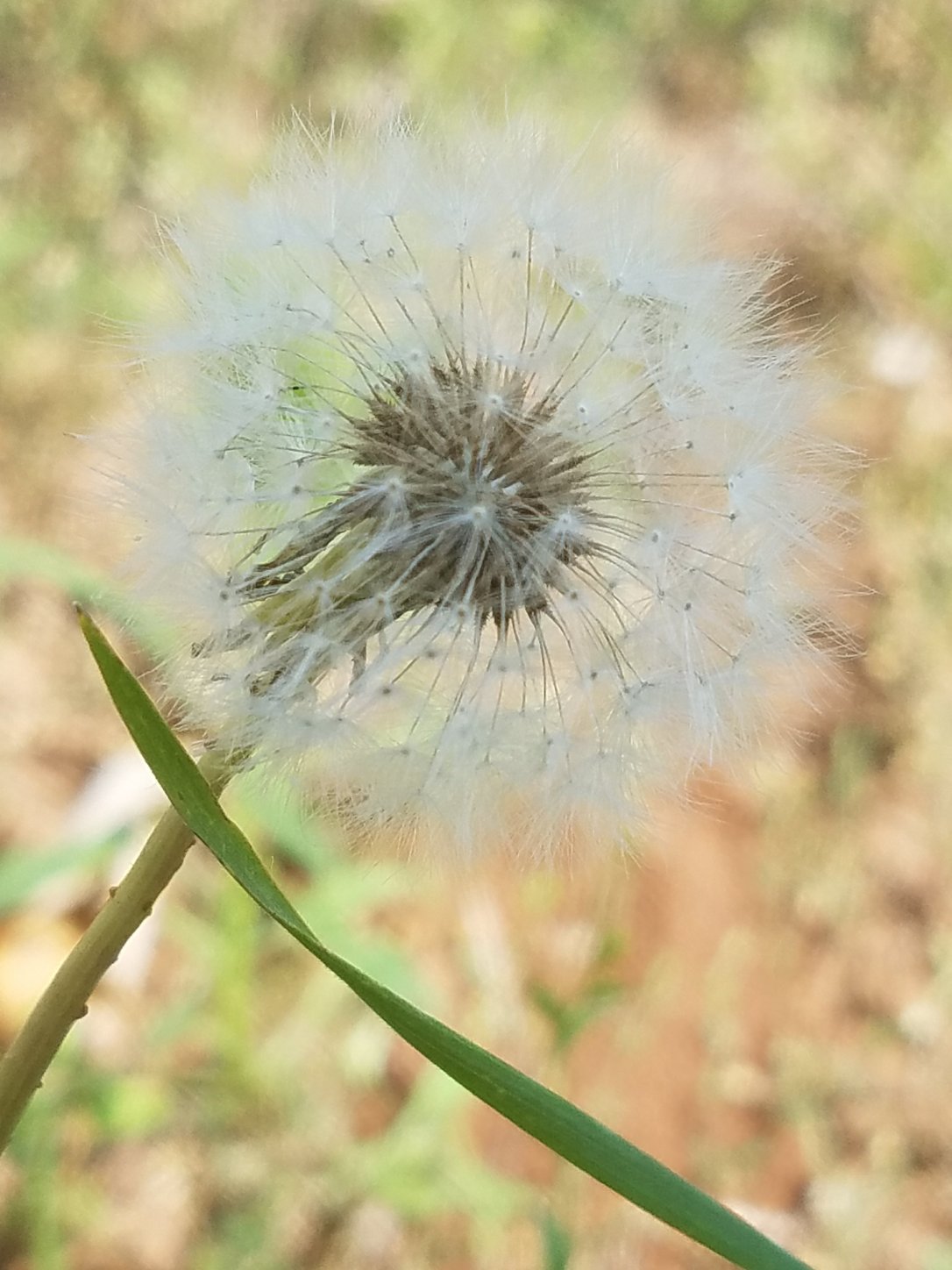 I know, I know, dandelions are considered weeds. I don’t pull them and we don’t spray anything to prevent them because the little yellow flower they produce is often the very first source of food for bees when spring arrives. I may be deathly allergic to bees, but I want to do everything possible to help them out each year. I happen to enjoy fruits and veggies. Bees and other pollinators make fruits and veggies possible because they buzz around spreading pollen from plant to plant. I also have small dishes filled with marbles and water. These are bee safe waterers because they can walk around on the marbles and access the water without risk of drowning. I leave fruit slices out for the butterflies as well.

The only other thing that happened today caught me by surprise. I heard the loudest buzzing I had ever heard and it startled me. I immediately jumped up and began looking around me for whatever bug was close enough to sting me. I was pleasantly surprised to see a hummingbird. I have never actually seen one before so, I ran inside, filled the feeders I had just purchased, and hung them all around the back porch. I am hopeful that I will see more in the very near future. I always have my phone with me while outdoors because I play music on my phone. I will snap pictures as soon as I see another one. I honestly had no idea they buzzed. It scared me until I realized that it was a bird and not a stinging insect.

I am trying to make a haven for wildlife with the wildflowers, zero chemicals sprayed, food and water sources for bees, insects, birds, and animals (mostly cats as far as animals, but I am pretty sure I am feeding a skunk and her babies when I feed the barn cats.) I don’t even spray pesticides of any form on my garden. I don’t want to eat the pesticides so, I don’t use them.

I am off to get my house back into order after having my in laws, son, daughter in law, and grandson, all visiting for two weeks. My house is so quiet. It’s quite strange. We also have a squatter in the chicken coop (It was left unsecured because we didn’t have any chickens yet.) Hubby has promised to deal with the skunk and her litter of mini stinkers without harming them so, chicks will come home and not have access to their coop until the skunk is evicted. 😂 I am not in any rush. The coop is built and that was the difficult part. I am still trying to convince hubby that I need a pair of calves too. I don’t care if they become dinner after about 2 years, I will just get two more when that happens. I simply want calves. I need a duck too. That way, I can name the calves, “Milk” and “Cheese”, while naming the duck, “Quackers”. (Yes, I know I am ridiculous. I enjoy being ridiculous.) Until next time…

Published by The Homestead On The Plains

I am a city girl who has recently moved to the middle of nowhere Oklahoma to start a homestead. I am a wife, mother, and grandmother. I have absolutely zero experience gardening, raising critters, or building anything bigger than a birdhouse. I love to paint, cook, and this has always been my dream. I am willing to try anything especially if it makes my heart happy and this adventure makes my heart happy. View all posts by The Homestead On The Plains