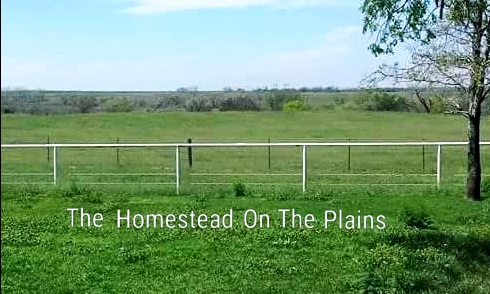 February 3, 2019 The Homestead On The Plains

Last year, we set up the coop and the run and right after I placed an order for chicks, we had a nasty storm that wiped out my run. I am EXTREMELY grateful that the company I ordered chicks from was kind enough to allow me to cancel my order since the chicks hadn’t hatched yet. We decided to watch what the weather did and how it affected the coop and run over the year and update designs and ensure that the chicks would be completely safe once they were calling the coop and run home.

This photo is OLD!!! This was taken of the coop and run when we built them last spring. The storm did a number on the run, the cover was ripped halfway off and almost got taken away by the wind, three of the PVC arches were ripped off of the fence posts, and 2 fence posts were ripped out of the ground completely. We fixed the fence post issue with concrete during the Fall. it isn’t a ton of concrete, so we will be able to remove the posts, if we decide to widen the run or move it completely.

This weekend, we put the cover back on the run. For those of you who haven’t be here since the beginning, the cover for the run is a dump truck cover, normally used to keep loads of sand, soil, and gravel from blowing out of the truck. Hubby brought me home two that were destined for the dump because they had EXTREMELY minor damage such as small holes or a rip or two that could easily be repaired. (I did patch all of the holes and rips and it took exactly 15 min.)

So, the cover is back on, this time we used hose clamps instead of lacing wire. We ran out of hose clamps halfway through so, I am waiting for my order of hose clamps to be delivered by UPS before I can finish securing the cover. We had some nasty wind so, I know it is secure this time and definitely not going anywhere this time.

It looks really nasty out, but it was 68° F (20°C) and perfect weather for what we were doing. Hubby and I also decided to take an old screen door from the dairy building (I have a bunch of windows and doors in there from the house being updated) and it is now the door to the run. We mounted it on the back side of the coop because it seemed like the best place for it. I didn’t take pictures of the door yet because that section of fencing isn’t completely finished yet. I will continue to take pictures as we complete tasks.

After the cover was secured, we started on fencing. When the companies that sell fencing seal up these rolls of fencing, they wrap them in lacing wire and then in plastic. The problem with this is that the lacing wire blends in with the fencing and is very difficult to see. It took longer to open the rolls of fencing than it did to secure them to the posts.

Again, I am waiting for hose clamps, which will also be used to secure the fencing to the posts properly. For the moment, zip strips and lacing wire is holding the fencing in place. This is not just a single layer of chicken wire. There are hog panels behind the chicken wire on the inside of the coop. It is coated with green plastic so, it just blends and looks pretty much invisible both in pictures and from the back porch.

It really did look like it was going to storm. We didn’t get any rain, just a bunch of brutal wind. If you look closely at the photo above, you will see weird rectangles in the grass. Those are hog panels. I told you, they blend. 😁 Hubby also wants two strands of electric fencing set at 1 ft and 3 ft as a perimeter around the coop. Our friends have lost every chicken every time they start laying eggs. I keep reminding him that they don’t secure the coop entrance and the door from the coop to the run is just a doorway and not secure at all, but he wants electrical fencing. I figure it will come in handy when we eventually get calves (this is going to be a while because neither of us know anything about cattle and we are doing research and talking to people who raise huge herds.) Also, he’s male and from my experience, every guy enjoys cool things like electrical fencing, tractors, and 4 wheelers. So, I am looking at electrical fencing as his part in the whole aspect of having chickens.😂😂 If it keeps them safe great, even if it is a bit ridiculous in my mind. The shutoff switch will be on the front of the coop and the fence will be about 2-3 feet away from the fencing on all sides, so don’t panic, the chickens won’t get zapped. (That was my concern too when he said he wanted it.)

Currently we still need to secure everything once the hose clamps arrive. (I ordered a pack of 100) Then, we have to finish enclosing the run. The end of the run is still open above the fencing so, that needs fencing, the area where we put the screen door needs fencing and the door itself needs fencing because it currently has plastic screen installed. We need to add a few screws to the roof where wind has peeled up the roofing a bit and then silicone to seal where screws are added. Then, cinderblocks around the run at the bottom of the fencing (it is buried, but cinderblocks add more protection). I still need to install roosting areas and nesting boxes. Then, a raised floor because water flows right through the coop when it rains so we will let the water continue its natural course and raise the floor by adding a floor of pavers with plywood above them. This will keep predators from going under the coop to try to get in while supporting the raised floor. I will also secure fencing around the base of the coop, buried of course. Finally, I need to order chicks again.

Once chicks are feathered out and living in their new home, I will get to work on the shed next to the coop. It will become a second coop and it will be sharing a run with the other coop. We will move the door, add another dumptruck cover from the end of the run, over the coop, and attached to the shed roof. We have already fenced in the back side of the area between the two buildings because we used the white metal fence to support the new fencing. It just seemed logical to go ahead and fence it while we were installing the fencing. I may add another building on the end of the run for ducks, but I haven’t decided yet. I definitely want ducks, but they obviously need a water source and I don’t know if I want to sink a kiddie pool that close to the house. I may put them on the back side of the chicken coop and run. I will cross that bridge when I get to it.

Published by The Homestead On The Plains

I am a city girl who has recently moved to the middle of nowhere Oklahoma to start a homestead. I am a wife, mother, and grandmother. I have absolutely zero experience gardening, raising critters, or building anything bigger than a birdhouse. I love to paint, cook, and this has always been my dream. I am willing to try anything especially if it makes my heart happy and this adventure makes my heart happy. View all posts by The Homestead On The Plains